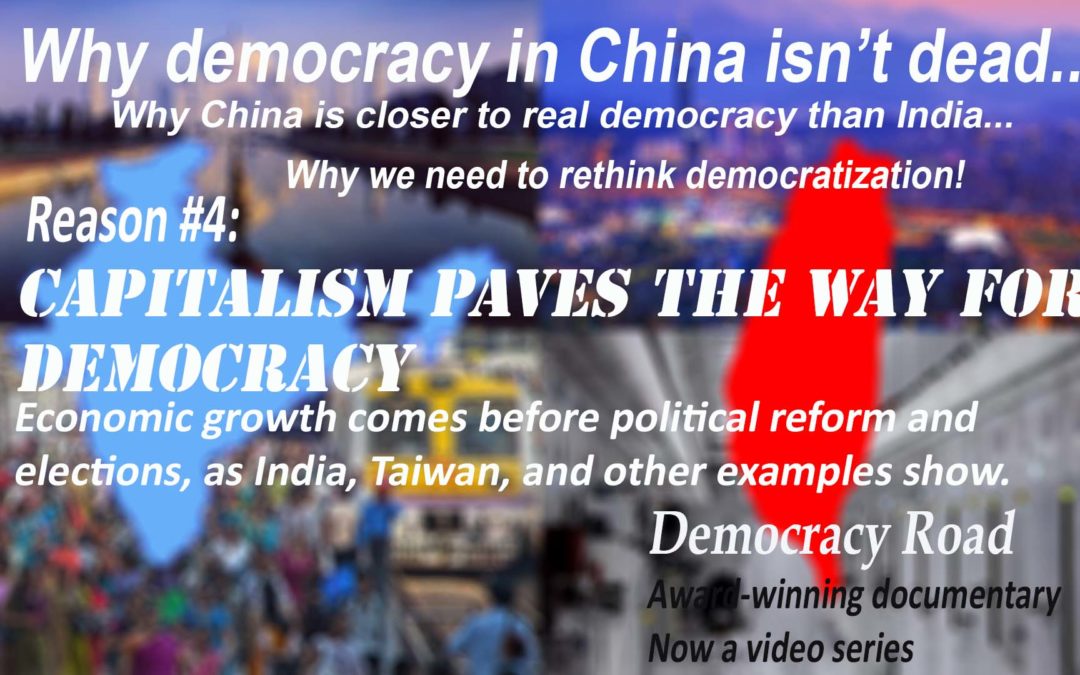 One of the reason we are saying that an authoritarian government that tolerates virtually no dissent or political freedom among the people will become more democratic than India is because it has already happened.  We are merely saying that there is a good chance it will happen again.

Can China do what Taiwan has already done?

We are talking about Taiwan.  The comparison with India is fascinating.  Taiwan separated from China in 1949. India achieved independence from the British Empire in 1947.  So the timeline is roughly the same.  At the time, India was poor, backward, and mostly agrarian.  Taiwan was roughly the same.

India: Elections plus socialism and no growth

India turned toward democracy immediately, implementing democratic institutions such as a national parliament, multiple political parties, and elections.  At the same time, India maintained a very socialist-oriented economy, with so many restrictions it became known as the “License Raj” because a license was necessary to engage in almost any economic activity.

Taiwan took a very different approach.  Upon taking control of Taiwan, the government of Chiang Kai-shek, the Guomingdang or KMT, immediately declared martial law, a condition it maintained for forty years.  Over those forty years the KMT ruled Taiwan absolutely.  There were no elections, no freedom of speech, no freedom of assembly, and not much political freedom of any kind in Taiwan.  To the contrary, there, at times, mass round ups and executions of those thought to be opposed to the government.

However, the KMT did pursue a very free market oriented economic reform program, including an equitable land distribution program and plenty of support for private property, foreign investment, and entrepreneurship.

Taiwan grows and changes.  India does not.

Five decades later, India and Taiwan were in different positions, to say the least.  The economic race wasn’t even close.  Taiwan outgrew India so much that, by the year 2000, its per capita GDP was more than 10 times India’s.  In short, while Taiwan was no longer poor, backward, and agrarian, India was.

Corruption decreases in Taiwan.  Not in India.

The political angle is even more interesting.  Let’s start with corruption.  Using the Corruption Perception Index as produced by Transparency International (a score of 100 means no corruption, a score of 0 means total corruption), Taiwan improved dramatically, with a score surpassing 60, approaching the level of 70 which is the standard reached by virtually all developed countries (US, Germany, and Japan all score in the mid-70’s).  India’s score remained in the mid to high 30’s, peaking at 38, not improving materially, hovering at the same level as other low income countries, including non-democratic countries like China, Russia, and the like.

Democracy in Taiwan soars past India

Lastly, we have the quality of the overall democracy, for which we use the scoring system applied by Freedom House (a score of 100 means perfect democracy, a score of 0 means complete lack of democracy).  Using Freedom House’s scoring system, India has consistently scored in the mid to high 70’s, most recently a 77, which means that, according to Freedom House, India is a fairly democratic society.

In contrast, for many years Taiwan averaged a Freedom House score in the mid-twenties, meaning that, Taiwan was not very democratic, no surprise considering that Taiwan was under martial law for almost 40 years.  By 1986, Taiwan’s score was still only 30, way behind India’s 77.

Then the darnedest thing happened.  Over the next decade, martial law was lifted, multiple parties were allowed, elections were held, and Taiwan’s score soared past India, standing now at 89.

The significance of Taiwan’s come-from-behind victory

From Freedom House’s point of view, nothing really changed in Taiwan from 1949 to 1986.  Then, change came quickly, from no democracy to highly democratic in just ten years.  Does that make sense?

This is where Freedom House gets it wrong, and where we all get it wrong.  Think about it, over that time period, while India was hardly changing at all economically, Taiwan was growing like crazy.  Incomes were rising.  Education was spreading.  Entrepreneurship was exploding.  Doesn’t it seem fair to say that people were changing in Taiwan?  Isn’t it reasonable to suggest that Taiwan’s culture was changing over those forty years and that this change made it possible for Taiwan to then successfully democratize?

Professor Ronald Inglehart of the University of Michigan is co-founder of the World Values Survey and one of the world’s leading researcher relative to culture and democratization.  In our documentary film, Democracy Road, commenting on democratization in Taiwan, Professor Inglehart states it is typical for cultural change to be slow and gradual.  He also remarks that this slow and gradual cultural change is what allows the institutional change—holding elections and granting freedoms—to be relatively quick.  Freedom House doesn’t measure culture, so its ratings don’t reflect the change that was taking place all along in Taiwan.

Keep in mind that, as we point out in another essay, Freedom House’s report on India also includes admissions that India’s democracy is fraught with dysfunctional practices like police torture and extrajudicial killings by security forces.  Taiwan has none of that stuff.  Freedom House’s scoring system doesn’t include these deficiencies, but in practice this means that the score actually understates Taiwan’s advantage in terms of true democracy.

Freedom House’s scoring system doesn’t account for culture and it also doesn’t give much weight to common democratic dysfunctions such as the rule-of-law issues we have highlighted.  In this way Freedom House’s approach is similar to the conventional approach most people take when assessing democracy.  It focuses largely on leaders and the institutions of democracy, much less on culture, the people, and how the democracy actually functions.  I think Freedom House’s work is actually quite valuable and useful.  It is a great service to collect and publish data and analysis as Freedom House does.  But their approach isn’t perfect and reflects the skewed perspective that many have.

That’s a three-fer.  Taiwan outperformed India on economic growth, corruption and overall democracy.  It was a clean sweep and a great example of how capitalism comes before elections and paves the way for democracy.

If China stays on same path as Taiwan, result likely the same.

Does Taiwan remind you of any country?  How about China?  Freedom House said that Taiwan was not democratic at all even as Taiwan was economically outperforming India by a wide margin.  Freedom House currently says China is not democratic at all even as China economically outperforms India by a wide margin (China’s per capita GDP is roughly 500% of India’s.)  Taiwan eventually became a better democracy than India.  Is it really so unreasonable to suggest that, if China continues to economically liberalize and grow, it will also eventually become a better democracy than India?  That might seem like a pipedream.  But, when you consider Taiwan’s experience, perhaps it seems like a much more reasonable expectation.

For what it’s worth, it should also be mentioned that Chiang Kai-Shek held office in Taiwan for 25 years and that, during the 46 years when Taiwan did not have presidential elections, it essentially had only three presidents.  Depending on how you count it, Lee Kuan Yew lead Singapore for more than 30 years.  This doesn’t mean that ruling without term limits is preferred or that there aren’t risks associated with it.  But it isn’t the kiss of death, either.  If economic liberalization continues, and policies are put in place to enhance the rule of law, education, etc., then an extended term and limited doesn’t have to mean a lack of progress.

Taiwan did not follow its path lone.  South Korea, Singapore, and Hong Kong, like Taiwan, all emphasized economic growth first, and saved elections for later.  All of them outperformed not only India but Kenya, Brazil, Pakistan, Bolivia, and other countries which held elections first and were not able to sustain economic development.   Not only did Taiwan, South Korea, Singapore, and Hong Kong, grow faster, eventually, after many decades, they ended up with much lower corruption, stronger rule of law, and better, freer, fairer democracy.  This historical experience is another reason we say that economic growth comes first, elections later.

Beyond history, we also have research to support our thesis that economic growth via capitalism paves the way for democracy.  The World Values Survey (WVS) is a group of social scientists who have been giving cultural surveys in more than 100 countries around the world for 40 years.  The WVS measures a wide variety of attributes, including individualism, tolerance for outsiders, interest in politics and activism, etc.  It really is an ambitious, important and I think unrivaled attempt to understand how the way people actually think and behave—their culture—impacts the freedom and prosperity they achieve.

The work published by the WVS is, for the most part, highly technical, so I won’t go into too much detail here.  But I will quickly mention three key conclusions of the WVS.  First, there is huge cultural gap between developed and developing countries, meaning that, although the US and Japan aren’t exactly alike, and China and India aren’t exactly alike, the developed countries actually have much in common, as do the less developed ones, and big gap really exists between the developed and the developing.

Secondly, to democratize, a less developed country has to undergo a cultural transition, becoming culturally more like advanced countries.

In conclusion, let’s summarize the points we’ve made in support of the notion that China is closer to real democracy than India and that we need to rethink our approach to supporting democracy.

That’s why the final part of our essay series focuses on this most critical topic—how the right culture enables the people, not just leaders, to support democracy.