CAPITALISM PAVES THE WAY FOR DEMOCRACY 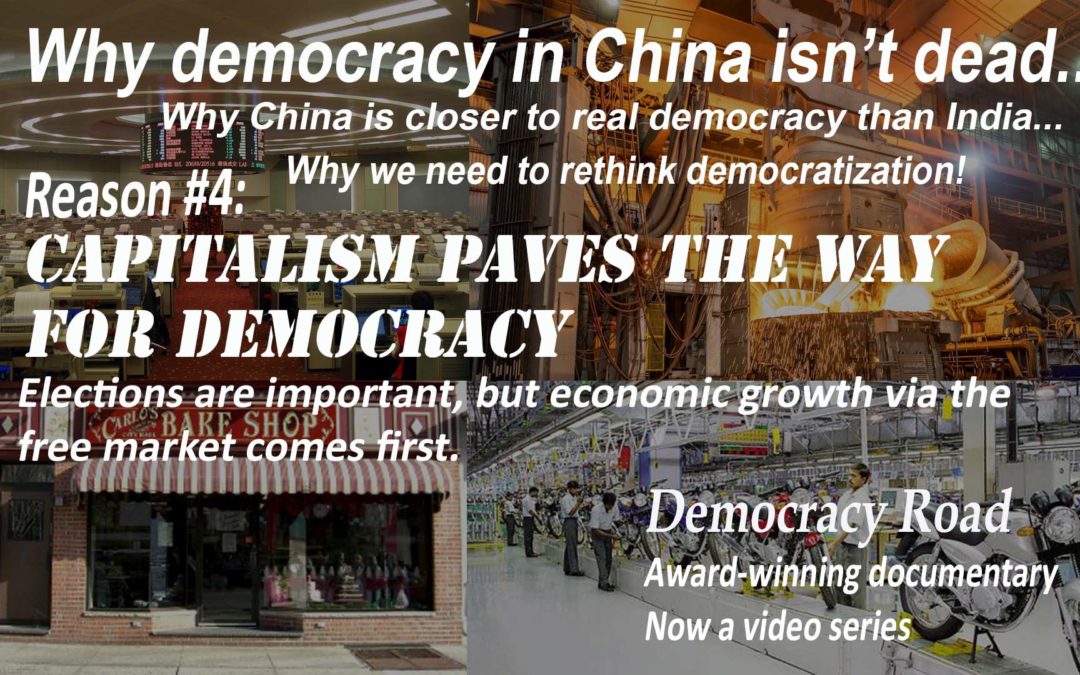 We vote every two years.  Some vote less frequently.  Many never vote.  But we go to work, buy stuff, and pay bills every day.  Losing your job means more to just about everyone than losing an election.  That is why former President Bill Clinton famously said, “It’s the economy, stupid.”  That is also, in a nutshell, why capitalism comes before democracy.

Clinton was making the point that economic issues are almost always more important to voters than any other issue.  We are making the point that poor countries aren’t culturally ready for democracy and that, while elections do not prepare such countries for democracy, economic development does.  In other words, when it comes to democratization, “It’s the economy, stupid.”

Despite the recent roll back in political freedoms in China, democracy is not dead there and, in fact, China is closer to real democracy than India.  Along the same lines, we need to rethink our approach to assessing and supporting democracy.  These are the main points we are making in this essay and video series.  We aren’t endorsing the political climate in China, merely saying that it isn’t the only factor to consider.  Furthermore, at this point in time, still relatively early in China’s development, the political climate is not the most important factor.  It is the economic climate that matters most, not just to the economy, but to democratization.

Democratization isn’t an event.  It’s a process.  It takes time.

We treat democracy like an event.  Hold an election, become a democracy. That’s how the thinking goes.  But, for less developed countries, it never works.  The best you get is “dysfunctional democracy,” i.e., elections but with corruption, police coercion, electoral irregularities, and general weakness in the rule of law, among other deficiencies.  We are suggesting that this is because less developed countries are not culturally ready for democracy.

Our argument here is that, rather than an event, democratization is more like a process, an ability that is developed over time.  That process involves changing the culture so it can support democracy.  Since advanced, prosperous countries are good at democracy, it stands to reason that economic growth is part of the process.

There is considerable evidence to support the notion that economic growth is necessary for successful democratization, including the example of democracies like Taiwan and South Korea and also research from organizations like the World Values Survey.  We will cover such evidence elsewhere.  Here we will focus on a basic question—if countries aren’t innately suited for democracy, why does capitalism prepare them for democracy when elections do not?

Particularly in poor countries, economic life is central to everything

We started by making the point that economics is more important to people than politics.  If that’s true in America, think about how much stronger that feeling must be in poor, less developed countries where people live day to day and economics is literally a game of survival.  Does a poor person in such a country, with barely enough to stay alive, dream of speaking his mind freely and surfing the internet unencumbered by state censorship?  Or does that person simply want a better income and a better life?

But that’s just the beginning of the analysis.  Let’s walk through the cultural process.  In poor societies, nothing changes generation after generation.  People don’t feel empowered; they don’t think they can shape their own future because they have never seen anyone do that.  No change means no social mobility which means everyone stays in the same position to which they’re born.  This includes leaders, who have all the power and rule with an iron first because they are never challenged.  Followers don’t question leaders.  Because leaders can do whatever they want, the rule of law is weak, honesty in short supply.

There are other important cultural attributes that are typical of less developed societies, but these are the main ones—rigid hierarchy, authoritarian leadership, un-empowered people, weak rule of law.  As we said, elections do not change this.  People vote, fingers become purple, but nothing else really changes.  Each leader is as corrupt as the last.  Even if a good leader is elected, it is extremely difficult for any single leader to change the corrupt and coercive bureaucracy.  Elections, although indispensable to a well-functioning democracy, are not a strong mechanism of accountability, which is one reason why even voters in advanced democracies feels disenfranchised these days.

But economic growth via the free market touches lives directly.  Incomes increase, life improves.  Social mobility increases which engenders empowerment in the people.  As the economy grows, companies become more complex.  Leaders need people who can think.  Good people, who can choose where to work, won’t work for tyrants who make all the decisions.  Leaders become more egalitarian; subordinates become more empowered.  The market holds people accountable.  Cheat me once, I won’t buy from you again.  Fairness and honesty are rewarded and thus increase.  Overtime, as people want to see assets and intellectual property protected, the rule of law strengthens further.

Economics and Politics are two sides of the same cultural coin

Let’s take the analysis one last step.  We tend to think of economics and politics as being separate spheres of life.  In fact they are closely linked by culture, among other societal concepts.  A more accurate depiction would be that capitalism and democracy are both built on the same cultural foundation.  The table below briefly explains a few of the key cultural linkages between politics and economics.

Cultural Links between Politics and Economics

The proof of this link between economics and politics is the fact that, for virtually all countries, if they can’t master the economic side (prosperity via capitalism) then they can never seem to master the political side (effective government via democracy).  Similarly, once they do master the economic side, it virtually always leads to mastery of the political side.  The fact that the economic side comes first doesn’t mean it is more important, but it does mean that we need to pay attention to the linkage and understand how it relates to the process of democratization.

You might think the above is just a bunch of mumbo jumbo—theoretical concepts that aren’t practical and don’t relate to the real world.  I might have thought the same before I spent two decades working, managing and doing business in China.  Intangible concepts like the rule of law, accountability, empowerment, individualism, authoritarianism, egalitarianism, and others became extremely tangible to me as I tried to be effective in a very different cultural environment.  If these cultural concepts do not seem real to you, I would suggest it might be because you lack direct experience.

If you don’t accept the cultural explanation above, you still have to answer some critical questions.  Why is democracy so rare (only 15% of the world’s population having an effective democracy)?  Why do elections seem incapable of solving endemic problems like corruption, police brutality, general weakness in the rule of law, and other issues associated with “dysfunctional democracy?”  Why are virtually all poor countries that have elections “dysfunctional democracies?”  Why are prosperous, free-market oriented economies able to overcome the challenges of “dysfunctional democracies?”  Why have societies that emphasize free market reform first, and save elections for later, like South Korea, Taiwan, Hong Kong, and Singapore, outperformed, both economically and politically, those that focused on elections first, like India, Kenya, and Brazil?  Lastly, why do the researchers who have collected the world’s largest trove of data related to culture, development, and democracy, the World Values Survey, concluded that economic growth generally precedes true democracy?  You might not understand the cultural details, but in answering these questions you are likely to arrive at the same conclusion nonetheless—capitalism paves the way for democracy, elections come later.