CULTURE: THE LINK BETWEEN CAPITALISM AND DEMOCRACY 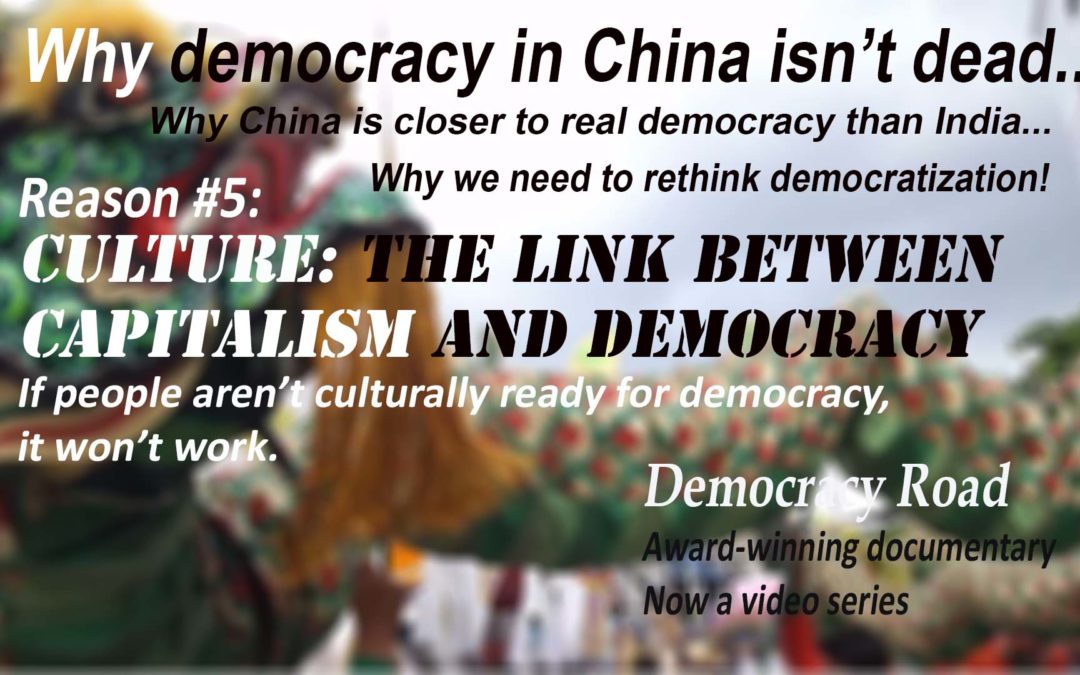 “China’s real social reform will come from the people themselves.  Civil awareness is consolidating as the economy grows and rights protection is enhancing.”

The Chinese government might not be moving toward democracy, but the Chinese people are.

The people build a democracy, not the leaders

This is the crux of the point we have been making in our essays and videos—it is the people that determine if a country is democratic, not the leaders.  If the people learn to think and act democratically, democracy will follow.  What leaders do, while not without impact, will rarely stretch much further than what the people can support.  That includes today’s China, where political reform has actually moved backward, not forward. This is why we are saying that China is closer to real democracy than India, because China’s economic progress is so much further than India’s.  If economic liberalization continues, so will China’s move toward democracy.  I would suggest this is also the point being made by Hu Jia in his comment above—China’s people are changing and this change will bring democracy.

When I say “think and act democratically,” I don’t mean in some kind of wishy-washy, New Age, “let’s all mediate on democracy” sort of way.  I am referring to something that is actually very tangible, observable, and, at times, measurable—CULTURE.  Democracy is about more than just casting a ballot occasionally and then waiting for good things to happen.  A successful democracy requires certain types of behavior.  Behavior, in turn, is impacted by culture—the values, expectations, attitudes, and habits individuals and groups apply to their lives.  If you want a democratic system, you need a democratic culture.

Myanmar: The latest example of democracy failing to take hold

We will be discussing the impact of culture in detail, including historical examples, research and scholarship, and personal experience.  For now, let’s put the topic in perspective by pulling a story from recent headlines, specifically Myanmar, where we have a Nobel Peace Prize winner, a symbol of freedom, courage, and fortitude who was thought to be a democratizer in Myanmar, engaging in some very undemocratic behavior.

Aung San Suu Kyi spent years under house arrest in her native Myanmar by a military which refused to allow elections, which in turn contributed to her winning a Nobel Peace Prize in 1991.  Now that the military has loosened its grip and Ms. Aung’s party has taken power, with her at the top, she has become less democratic, not more, and has done nothing to stop the persecution of the Rohingya minority that is being killed, raped and driven from Myanmar en masse.  So we have a Nobel Peace Prize winner doing nothing to aid a minority group in her own country.  That’s not terribly democratic.

The New York Times had a great article on the subject entitled, “Did the World Get Aung San Suu Kyi Wrong” (Amanda Taub, Max Fisher, 11/2/17).  Below is a telling quote from the article:

“A 2015 survey by Asia Barometer found that most respondents in the country (Myanmar) opposed checks on executive authority, believed religious authorities should have a role in lawmaking, and said citizenship should be tied to religion.  Support for a strong handed ruler was high and support for full rights for the minorities was low.”

The survey responses above are excellent an example of what we mean when we say culture impacts democracy.  The people of Myanmar do not appear to be very democratically-minded.  Holding leaders accountable, having a voice, tolerance for all groups—these don’t seem to be priorities in Myanmar.  In other essays we will cite research showing that this type of undemocratic culture is actually common among less developed countries and differs substantially from developed countries.  Democratic values, while achievable by all societies, are not innate in any society.  They have to be developed.

We need to focus less on leaders, more on people

Our typical approach to supporting or evaluating democracy in a place like Myanmar is to assume people are ready for democracy and to then put our hopes in a key leader who we think will somehow “grant” democracy to the people.  As this example show, the reality is quite different.  The people aren’t ready for democracy and the leaders, in terms of culture, are typically more similar to the people than not.  Given this situation, as opposed to hoping to find the right leader, the only real option is to work to develop a democratic culture throughout society.  Fortunately, we know how to do that—via free-market-oriented economic growth.  Or, as we’ve said elsewhere, capitalism paves the way for democracy.

My personal interest in culture stems from my experience in China, 10 years living, working and managing there and another 10+ years doing business and traveling back and forth.  Much of that time was in fairly remote places which resulted in very direct, hands-on, authentic cultural experience for me.  The fact that rule of law issues are not limited to the highest level of government but rather pertain to lower level officials, businesses, and even individuals was obvious to me, as was the notion that weakness relative to rule-based behavior related to not only laws but how people work and cooperate.

It was also obvious that Chinese leaders, in business, not just government, rule with an iron fist.  They have all the prerogative and make all the decisions.  Subordinates are supposed to do what they are told and not ask questions.  Furthermore, it is not that subordinates want to ask questions but can’t.  They don’t even think to question decisions or circumstances because they are so accustomed to not doing so.

It was equally obvious that economic growth via the free market changed these behaviors.  The market obviously rewards honesty.  If you cheat someone they will never buy from you again which means honest companies and people win.  Businesses become complex.  They need educated personnel and can’t rely solely on one decision-maker, which means bosses need to hire capable people and give them responsibility.  Plus, people can choose where to work so if a boss is a tyrant, all the good people will work somewhere else.  The result is leadership that is more egalitarian and employees who are more empowered, i.e., accustomed to taking initiative, thinking for themselves, and having a voice.  I witnessed and even participated in this pattern of change in China many, many times.