DEMOCRACY IS DIFFICULT (and we aren’t good at spreading it) 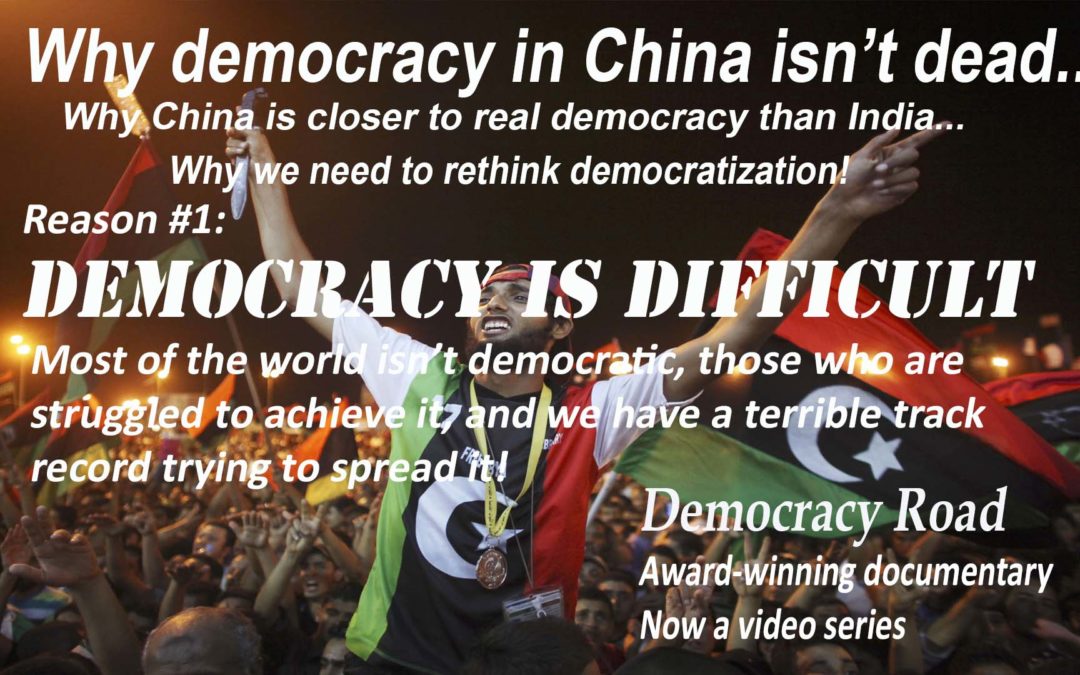 Are we good at spreading democracy?  Do we have reason to be confident?  Or is rethinking our approach long over due?

Have we been wrong about democracy for 200 years?

Supporting democracy is as American as apple pie.  America has always been passionately pro-democracy.  Being a beacon for freedom and democracy, helping and hoping other countries will adopt what we see as the best political system ever, is part of America’s political and cultural DNA.  America stands for democracy.  That could be America’s motto.  It might be the one thing left and right both agree on these days.   For what its worth, America isn’t alone in this regard.  America’s democratic friends in Europe and around the world are enthusiastic about supporting democracy as well.

This isn’t bad.  Supporting democracy is a good thing.  But, from the beginning of America we’ve been saying the same thing—countries that aren’t democratic should become democratic by having elections as soon as possible.  This is the advice we always give, for 200 years.

We don’t have much reason to be confident

This is the crux of the point we are making.  We need to rethink how we support, encourage, and even evaluate democracy around the world.   In making the case as to why we should reconsider our approach, I would start by pointing out that we really don’t have much reason to think our approach works.  We haven’t had much success.  We have little reason to be confident.  Examining the world, maybe we should consider that democracy is harder than we think.

First, although many people don’t realize it, democracy is rare. Only 15% of the people in the world—1.2 billion out of a total global population of 7.4 billion—live in a prosperous, free, functioning democracy. The rest live in relatively poor countries that are either completely non-democratic or highly dysfunctional democracies.  (More on “dysfunctional democracy” in other posts.)  Plus, according to Freedom House, a non-governmental organization that tracks and studies democracy around the world, democracy has actually been in decline for the last ten years.  To summarize the current situation when it comes to democracy, we haven’t made much progress and aren’t moving in the right direction.

Iraq and Afghanistan: The latest failure of democracy to take root

Keep in mind that, amidst this lack of success, there were many times we either tried to help directly or were hopeful events were moving in the right direction, only to be disappointed in the end.  The most recent examples would be Iraq, Afghanistan, and the Arab Spring.  In the first two cases, we used military intervention to produce regime change and then oversaw elections in the hopes of building democracy.  Nothing approaching democracy was achieved in either country.  The Arab Spring held the promise of replacing dictators with democracy.  Instead, in almost all cases (Tunisia being the possible exception), authoritarian regime replaced authoritarian regime and democracy never saw the light of day.

Our failed efforts go back further than that.  To put our track record in perspective, it is helpful to consider not only democracy but overall development.  After World War II and the success of the Marshall Plan in rebuilding Europe, there was great optimism that the advanced countries could help the rest of the world catch up to us in terms of development and democracy.  Foreign aid programs, like the Alliance for Progress, which was described as the Marshall Plan for Latin America, were launched.  Unfortunately, these programs never really worked.

Then came the independence movement, as country after country in places like Africa and Asia shed their old colonial masters and set off on their own course.  Many people felt that these countries, unburdened of the yoke of colonial oppression, would naturally move toward freedom and prosperity.  Most did not.

Then came the Democracy Movement, as an unprecedented wave of countries in places like Asia, Africa, and Latin America, embraced the ideal of democracy and held elections.  Surely this would lead to freedom, development, and prosperity.  It didn’t, not really.  The result was just poor countries with big corruptions problems who happened to hold elections (i.e., “dysfunctional democracy).  Most recently there came the end of communism, which would surely allow countries burdened by a bad system, to soar.  Many of them did not.

The optimism of the past is aptly captured by a past-president of the World Bank, Robert McNamara, who in 1973 claimed we would “end poverty within a generation.”  We didn’t even come close.  As was mentioned above, only 15% of the world’s population lives in a free, prosperous, advanced democracy.  If that’s not a good reason to rethink our approach, I’m not sure what is.

Democracy is strong in America, but it sure wasn’t easy

While we’re on the subject of building democracy, let’s consider America’s story.  On the one hand, America is the world’s longest running democracy, a beacon of freedom, a pioneer in the individuality that is the cornerstone of modern society.  On the other hand, America is a country whose system had serious flaws from the beginning, including the denial of the most basic human rights, and the denial of any individuality at all, to a large part of society.

There are those who would say America’s sins, the most glaring of which are slavery and segregation, negate and invalidate all of America’s other accomplishments.  I disagree strongly.  America is among the most successful countries of all time and really has been a beacon of freedom.  Yet America has struggled mightily.  The lesson is not that America is unusually flawed but that democracy is always difficult, for all countries.  If you think America is somehow uniquely flawed, you’re not looking at the big picture.  Remember Germany’s experience.   How about Japan?  The British?  The rest of Europe?  The fact is America descended from the UK and Europe.  Most of America’s flaws, and its strengths, came from those countries.  None of them has has a history without serious blemish.  The reality is that there is no country whose path to democracy has not been marked with extremely undemocratic behavior which persisted even as democracy itself was growing.

It is certainly time to rethink our approach to democratization

Given the above—that democracy hasn’t spread very far, that our direct intervention has mostly failed, that we ourselves struggled mightily to be truly democratic—is it really unreasonable to suggest that maybe we should reconsider our approach to supporting democracy.  If we did that, I think we’d actually give more credit to China and less to India.

A final point as follows.  It took America 100 years after slavery to end segregation.  It’s been only 40 years since China began to emerge from what is perhaps the most perverse, devastating, soul-crushing, society-destroying episode in human history, The Cultural Revolution.  If we can show China is at least on a good path, is it possible we simply haven’t given China enough time?