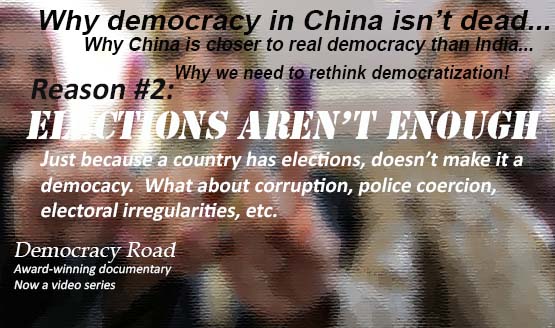 When they tell you that “India is the largest democracy in the world,” they don’t tell you that an estimated 1.8 million people (possibly many more) are victims of police torture each year in India.

They also don’t tell that India’s democracy has “bribery at all levels, including lower level judges and police; security forces implicated in extrajudicial killings, rape, torture, arbitrary detention, kidnappings, and destruction of homes; and security laws, criminal defamation legislation, hate-speech laws, and contempt-of-court charges used to curb critical voices.”  When you read these points, suddenly India doesn’t seem very democratic, does it?  (The above information was taken from Freedom House, a non-governmental organization that monitors and measures democracy and freedom around the world.)

In our subtitle above, when we say that China is closer to democracy than India, you will notice we use the word “real” democracy.  The point we are making here is that, while India might hold elections, it is far from being a real democracy, or, to put it another way, any kind of democracy that those of us in places like America or Western Europe would recognize.

Scholars have developed terms like “dysfunctional democracy” or “ineffective democracy” to describe countries like India, countries that have the institutions of democracy (elections, parliaments, constitutions, etc.) but don’t actually behave very democratically.  My favorite term that has been coined is “electocracy,” meant to connote a country that has elections but is otherwise not very democratic.  India is far from alone.  When you read the “Freedom in the World” report from Freedom House, you find that this type of behavior is common in many countries.

The examples of non-democratic behavior we are citing in this essay all related to the rule of law.  It is tempting to think that elections will eliminate rule of law issues like corruption.  Vote the bad guys out of office and no more corruption.  Unfortunately, that never seems to work.  When corruption and other bad practices are so pervasive, elections aren’t enough.  The politicians at the top might change.  However, in any government, the bureaucrats who administer the law and the police and security forces who enforce the law far outnumber the elected officials.  Even if “good” politicians are elected, which isn’t easy, it is still extremely difficult to eliminate corruption and other bad practices from the vast bureaucracy that is government.

For proof of this we need look no further than the country we’ve been discussing, India.  India has held elections for almost 70 years.  Surely there have been many well-intentioned and honest politicians along the way (and many dishonest ones as well).  Yet, the fact is, seventy years of “democracy” have had almost no impact on corruption.  The Corruption Perception Index, produced by the NGO Transparency International, rates countries according to their level of public corruption.  India’s score indicates a very high level of corruption, similar to less developed, non-democratic countries like China or Egypt and nothing like the much better scores of the advanced democracies in North America and Europe.  The same is true of Pakistan, Brazil, Kenya and every other less developed country that has held elections.  There just isn’t much evidence that elections have a strong impact on the rule of law.

Does the purple finger really change the world?

No doubt you’ve seen the images, from places like Iraq and Afghanistan.  Voters with the purple fingers indicating they have voted.  We are shown these images under the pretense that this is a big deal, that a big change has occurred in such countries where no one had a purple finger before.

The message above is that the purple finger isn’t really a big deal.  It doesn’t have nearly the impact we think it does, which is one of the reasons why democracy is still so rare (only 15% of the people in the world live in an effective democracy).

Fortunately there is something that improves the rule of law—economic growth.  As we pointed out in other parts of this essay series, the correlation between prosperous, free-market-oriented economies and strong, effective democracy is extremely high.  This is a major reason why we are asserting that China is closer to real democracy than India, because China’s economy is five times the size of India’s.  The political climate in China may have deteriorated the last several years.  But there is a good argument to be made that, at this stage, economic growth is more important.  If China’s economy continues to liberalize and grow, chances are the long-term impact on China will outweigh the short-term political currents.

Beyond China, this is also why we are saying we need to rethink our approach to supporting democracy in general.  Less emphasis on free elections, more emphasis on free markets.  That’s the way forward.  That’s the only way we are going to reverse the downward trend of democracy around the world.  More on that in our next essay.