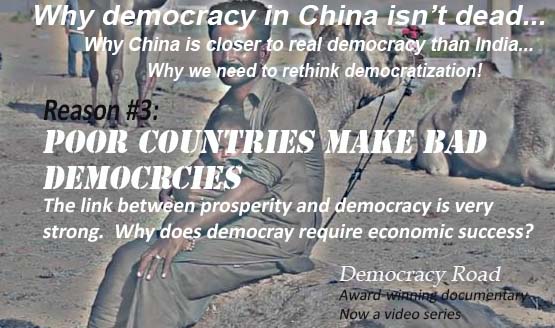 Pattern of differences between rich and poor countries

Should we sponsor drivers-ed classes for non-democratic countries?  That’s not really the point.  Our point is that there is actually a pattern of behavior among poor, less developed countries that reveals why they are not ready for democracy.  Driving is not the most critical aspect of this pattern of behavior, but it helps to demonstrate how pervasive the pattern is.

Saving driving for later, we are going to start by highlighting some of the more politically relevant aspects to this pattern.

Dysfunctional democracy is the norm for poor democracies

In our essay entitled “Elections Aren’t Enough,” we note that India has major problems with its democracy.  In support of this we excerpt material from the annual “Freedom in the World” produced by the NGO Freedom House.  Below is a similar excerpt from that report, except it includes behavior attributed to not only India but Turkey, Nigeria, and Brazil:

The above is just a sampling.  There are actually many other negative non-democratic behaviors described by Freedom House that are typical in some democracies but not in others.  The most interesting point is what type of countries have these problems.  It isn’t Belgium.  Or Canada.  Or Japan.  Or even Hong Kong or Singapore.  Advanced, prosperous, developed democracies, while not perfect, do not have anything close to these type of problems.  These extremely anti-democratic behaviors are found almost exclusively among poor, less developed countries, and there is virtually no poor country that doesn’t have these type of problems.

Digging a bit deeper into this issue, consider the problem of corruption.  The Corruption Perception Index (CPI) is produced annually by another NGO, Transparency International.   The CPI is based on surveys of business people and government officials.  A score of 100 means “No Corruption” while a score of “0” means “Total Corruption.”  Interestingly, there is virtually no high income country that scores below a 70 (the US, Japan, and Germany are all about 73-74) and no developing country with a score higher than 40 (China and India about 37-38, Russia 28, Brazil 43).  This pattern is remarkably consistent, with the correlation between prosperity and low corruption (eliminating oil rich but non-advanced countries) of about 80%.  It is also important to note that elections don’t seem to impact corruption.  Poor “democracies” are as corrupt as poor non-democracies, with perhaps the best evidence being India which has remained widely impoverished and corrupt despite almost 70 years of elections.

It is worth mentioning that, over the last few years, both China and India have had prominent anti-corruption campaigns within their own borders, evidence that even these countries themselves know this is a major problem.

Why do poor countries have bad drivers?

What about 1,000%!  According to the UN, on a per vehicle basis, traffic fatalities in less developed countries are at least 10 times higher than rich countries, in some cases up to 80 times higher.  Doesn’t that statistic blow your mind!   A Bloomberg article on traffic safety in Russia quotes Vladimir Kuzin, deputy chief of Russia’s traffic police, as blaming undisciplined drivers for most fatalities. “The primary cause of high mortality on the roads [is] drivers’ lack of respect for the law, a nihilism about the rules of the road. Drivers don’t maintain speed limits, don’t yield to pedestrians on crosswalks, and don’t wear their seat belts.”  The article also states that drivers were responsible for 84 percent of fatal accidents last year, according to official statistics.

Similar reports on this issue from sources like the UN or the government of China come to similar conclusions.  While road design and unsafe vehicles and even seat belts might play a role, there is no doubt that driving practices—following the rules—is also a huge reason behind this phenomenon.  Frankly, the numbers match experience.  If you’ve ever driven in a place like China or India or Russia, you know that driver habits are quite different from those in Germany, Japan, or Australia.

Weakness in the rule of law is a cultural issue

This point supports the main focus of this essay—that there is a pattern of differences between developed and less developed countries.  This pattern of differences, which goes well beyond having wealth or not, is remarkably consistent.  The chasm in the rule of law is actually part of a broader issue—culture.  Rich and poor countries are very different culturally, particularly when it comes to critical cultural attributes like empowerment, individuality, tolerance of outsiders, and rule-based behavior.

Culture is ignored, but is actually critically important

Research says culture is THE issue in democratization

Aside from the examples described above, we also have extensive research that supports this notion.  The World Values Survey is a group of social scientists who have been giving cultural surveys in more than 100 countries around the world for 40 years.  The WVS measures a wide variety of attributes, including the ones mentioned above.  The WVS is the largest trove of cultural data that we have, an ambitious, important and I think unrivaled attempt to understand how the way people actually think and behave—their culture—impacts the freedom and prosperity they achieve.  Below are two conclusions of the WVS, as excerpted from a book by the co-founder of the WVS, Professor Ronald Inglehart:

It seems clear that socioeconomic development brings predictable long-term changes.  One indication of this is the fact that the world views and behavior of people living in developed societies differ immensely from those of peoples in developing societies.

These (cultural) changes are not a patchwork of loosely related phenomena but a coherent pattern that integrates seemingly isolated events into a common hole.

Poor countries are not culturally ready for democracy, with weakness in the rule of law being perhaps the most important indicator.  This is why poor countries have such bad democracies (dysfunctional or ineffective).  Fortunately, culture can be changed and the rule of law strengthened.  However, elections don’t really drive cultural change or strengthen the rule of law.  Economic growth via the free market does.

Unfortunately, poverty remains the norm throughout the world

In closing, let’s put the divide between rich and poor countries into broader perspective.  Only 15% of the world’s population, one in six, live in advanced, prosperous nations. Five out of six, 85%, live in mostly impoverished countries that don’t really have a middle class and don’t provide much opportunity or support to people.  More than 70% of people in the world live on less than $10 per day, almost 40%, or 2.7 billion, live on less than $2 per day, and 1 billion, or 13%, live on less than $1 per day.  This is a harsh kind of survival in which people face challenges the developed world conquered long ago like walking more than one mile everyday simply to collect water and firewood or suffering from diseases that were eradicated from rich countries decades ago.  Examples of the challenges faced by the developing world include the following:

In addition, as mentioned above, these same countries suffer from a wide array of political and social issues, including corruption, police coercion, extrajudicial killings, criminal involvement in government, etc.  It is clearly no easy feat to overcome all of these challenges.

When China imposes severe restrictions to political freedoms, the reaction outside of China is harsh condemnation, which is of course to be expected given standards among developed countries.  But poor countries also have all of the problems mentioned above and more.  Yet somehow those problems don’t earn nearly as much outrage as restrictions to political freedom.  We are actually not saying that one type of problem is more important than another.  We are saying they are all related.  We are saying that there is ample evidence to suggest that economic liberalization and growth not only relieves hunger, health, and education problems, but it is also alleviates the political problems that beset developing countries. If that is the case, again, we would suggest, maybe China’s chances of becoming democratic should be re-evaluated.